Vered Organic Botanicals was one of the first brands I turned to treat my acne after my DIY phase, due to their acne-centric products such as the Herbal-Infused Toner and the Therapeutic Balancing Face Oil. I found these quite lovely and quite healing on my acne, so I was quite excited when Vered released her Herbal Balancing Oil Cleanser in early 2016.

The hype continued as I visited Credo Beauty in SF shortly after its launch, and the girls there waxed poetic about the cleanser being great for acne-prone skin. So I brought it home, intending to use it as a (very nice) makeup remover. I saw “oil cleanser” in the name and “rinse off” in the description, so this combined with my past experiences with the likes of the Elizabeth Dehn for One Love Organics Oil Cleanser and the Tata Harper Nourishing Oil Cleanser, and generally seeing products like the Marie Veronique Oil Cleanser or Tatcha Oil Cleanser led me to believe that this would fit nicely in the category of a first cleanse or makeup removal.

That was a bit of a misconception. 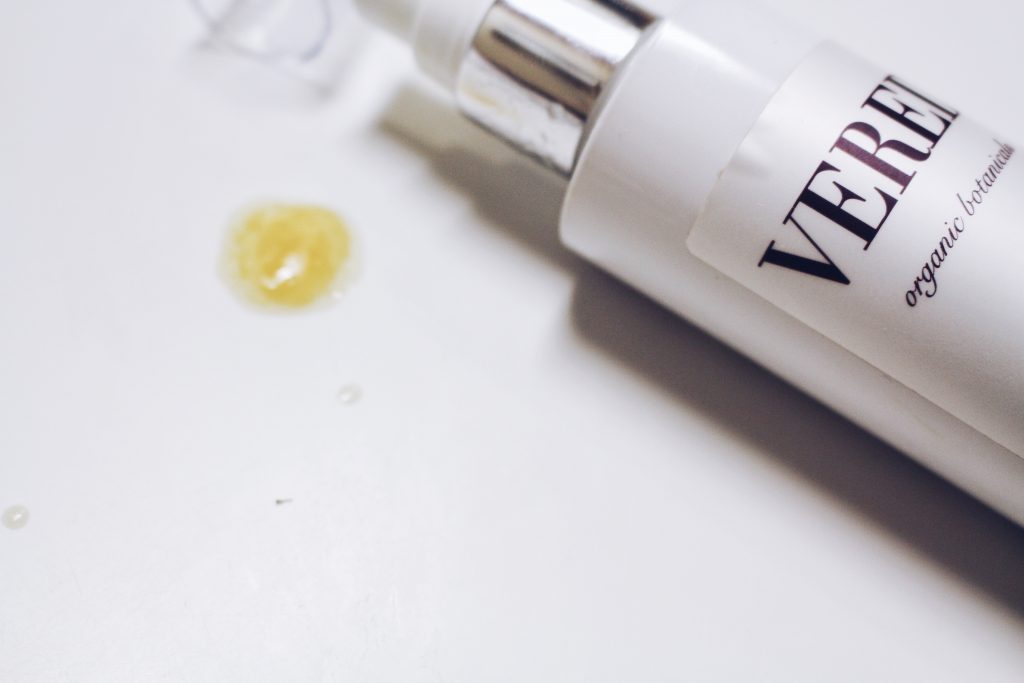 After a good shake of the bottle, I pumped out several pumps (the instructions suggest 5-8) of the lusciously golden formula, quizzically wetted my makeup-ful face (generally oil cleansers have you start out with a dry face), and began gently massaging the cleanser over my face.

The initial wetting of the face lent nicely to the cleanser spreading easily across the face, but I found my eyes stung (note: the instructions suggest to avoid the eyes. I was aware but did it for science) when I tried to massage my makeup off, and the cleanser dried out fairly quickly so it’s not a long massage-y type of cleanser like the In Fiore Lustra Oil Cleanser or the previously mentioned Tata Harper or One Love Organics.

When checking for makeup residue by passing over my face with a wet cloth post rinsing the cleanser, I found that there was a fair amount of my foundation left along with plenty of my eye makeup (eyeliner, mascara, some eyeshadow).

Having given up on using the cleanser as a traditional oil cleanser to remove makeup (in addition, I didn’t want to use the cleanser with a wet cloth since it is rinse-able with water plus it was pants at removing eye makeup), I delegated the cleanser to second cleanse status and was much more satisfied with its performance.

While most oil cleansers include an emulsifier that allows the formula to rinse off with water, this cleanser uses castile soap instead which also produces a slight foaming action not as drying as Dr. Bronner’s castile soap but not as gentle as YULI Halcyon’s gentle foaming action. After rinsing with water, my face was never left super dry, but also not super filmy, or with the doubt of “have I truly rinsed off the cleanser yet?” that the Tata Harper or the In Fiore usually leave me with. Just with a soft and clean but not squeaky clean and stripped feeling.

I found that the cleanser never contributed to more acne or further aggravated existing acne, and the scent I quite enjoyed–it is fairly citrus-y herbal like much of the other products in the line.

Taking a closer look at the ingredients, we have moisturizing oils at the top of the list (jojoba, hemp seed, pumpkin, sweet almond) followed by a bevy of herbs/flowers/roots (helichrysum, chickweed, speedwell, selfheal, lemon thyme, turmeric, calamus, to name a few). It’s heartening to see these all listed above the castile soap, near the end of the ingredients list, followed by glycerin and a blend of organic essential oils which make up the citrus-y scent.

Helichrysum I’ve mentioned before when talking about YÜLI Skincare’s Halcyon cleanser–in studies it’s been shown to be anti-inflammatory and antimicrobial. Hemp seed oil we just talked about in regards to the Josh Rosebrook Nutrient Day Cream–it has a balance of omega-3 and omega-6 fatty acids, thus making it also anti-inflammatory, which is great for acne. Same deal with the famous turmeric. Calamus, as it turns out, is not only anti-inflammatory, but also has great wound-healing activity (source, and source).

However, I wouldn’t say the cleanser overall was particularly mind-blowing–I personally think it’s not the best at removing makeup, and with its nice, calming ingredients I think one shouldn’t bother it with having to remove makeup. Calling it an oil cleanser, which, to be fair it is, is also confusing due to the role and performance of other oil cleansers on the market which prime consumers to expect oil cleansers to also function as makeup removers. However, I do think it’s great that Vered has found a way for the oil cleanser to rinse off without using the usual emulsifiers (especially since One Love Organics reformulated for certification but reverted back to an older formula with di-ppg-2 myreth-10 adipate due to customers complaining about the newer formula being harder to rinse off).

Have you tried this cleanser? Would love to hear your thoughts! If not, what’s your favorite second cleanser at the moment?

tl;dr Solid cleanser for a second cleanser post-makeup removal–don’t be confused by the oil in the oil cleanser and try to remove eye makeup.

You can purchase this from Credo Beauty or The Detox Market.

Disclaimer: I purchased this product with my own money from Credo Beauty. Affiliate links are included in this post. All thoughts and opinions are my own. I am not being compensated for my words.

Feeding my skin with Dr. Alkaitis

A liquid, a powder, and a gel…