Because I left my haircare at school and my sister ran out of everything else. 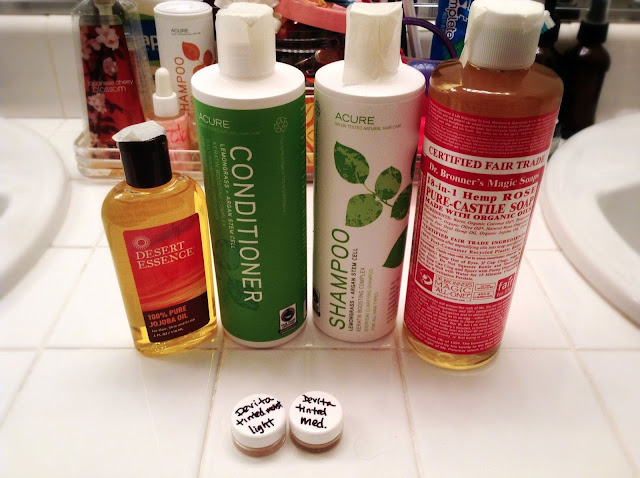 From left to right:
1. Dessert Essence 100% Pure Jojoba Oil
My sister and I have used jojoba oil to remove makeup along with a wet flannel for about half a year now. When I went back to school, I deviated and tried Aura Cacia’s jojoba oil, Aura Cacia’s sweet almond oil, but now that I’m home again and she’s running low on her current Dessert Essence jojoba oil, we decided to pick up another. As far as differences between brands, I couldn’t tell you. I find them all to work well as makeup removers and body moisturizers.
2. Acure Organics Lemongrass + Argan Stem Cell Shampoo and Conditioner
We both loved the Argan version for how soft and happy it made our hair feel, but now that the weather is warming and up (and we both can sweat), we decided to try out the Lemongrass version for its everyday clarifying powers. It has the same soft hair effect as the Argan version but with a lemongrass scent. I’ve continued washing every other day, but with the hot California weather and oilier second day hair, I am contemplating going back to everyday washing…
3. Dr. Bronner’s Magic Soap in Rose
Last summer, we got the Lavender version and enjoyed that with a loofah for the body or to clean makeup brushes. I am loving the Rose scent. Does not smell like your grandmother’s perfume. Instead, smells like awesome.
4. Devita Tinted Moisturizer samples in Light and Medium
I just saw the Green Beauty Bunny’s review on the Devita Moisture Tint in Light a bit ago, so of course I was excited to see it in store. (And I use the Devita Solar Protective Moisturizer already.) My complexion seems to run between light and medium for everything (think 11 and 22 for RMS ‘un’ cover-up, 115 and 125 for Vapour) so I thought it’d be safe to sample a bit of both. I’m not thrilled with the product–it has the same mattifying effect as Devita’s Solar Protective Moisturizer, which my drier skin does not love. Unfortunately, my skin still bears acne battle scars, so the tint is pretty undetectable. However, less dry, less blemished skins may like this.
Have you tried any of these products before? What do you think of them?

Today in the mail…