For years I shaved my pits and legs with a Gillette Venus razor from the drugstore, with moisturizing strips and three or even five blades. When I went green, I switched my shaving cream from Skintimate Shaving Gel to my Acure Organics conditioner or just straight jojoba oil from Desert Essence. Occasionally I would get nicks and cuts and ingrown hairs, I would sometimes get smooth shaves and sometimes not depending on how much time I took, but the duo did the job and I was much more interested in facial oils over luxuriating my shaving experience.

The mister, on the other hand, is super into razors, follows the shaving subreddit Wicked_edge, has used a Merkur safety razor for years, and even has a whole shaving routine complete with a shaving brush. “I think you would really like using a safety razor,” he’s said multiple times, but I have this problem where I say “no, maybe not, not now” to his suggestions of “let’s try this” or “let’s do that” until I see one more authority on the subject.

Oui Shave started popping up in the green blogosphere as a luxurious shaving experience, complete with razors named after Sex and the City characters. Not just any razors though–14K gold and chromium razors with handles tailored to a girl’s height. (Also, the endless amount of “oui” puns don’t hurt.) I had added a touch of green luxury to every other part of my skincare, body care, hair care, and makeup experience, but shaving was no man’s land. 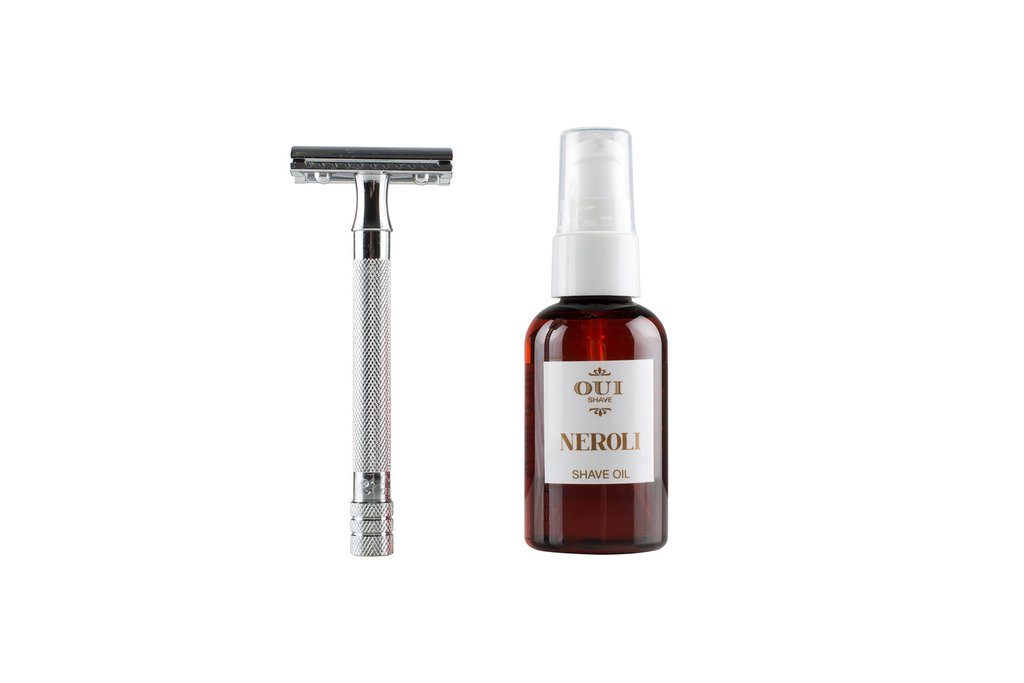 The first thing the mister said when I opened up my new Samantha Chrome Shave Set was, “Hey. That’s a Merkur women’s razor.” What? We looked it up on Amazon, and sure enough, there was the “Samantha” chrome razor and the “Carrie” 14K gold razor, offered at about 2/3rd of the price sans Sex and the City flair, subtracting out the price of the shaving oil that comes in the shave set with the razor.

Based on the blog reviews I had read before and wording used of “Oui Shave’s razors”, I was under the impression that the brand made the razors. At the time, the wording in the About Us section as well as the how-to videos were quite vague. (Now, the page references a “centuries old German manufacturer”, but that is it.)

I felt a bit betrayed and misled, paying extra money for a prettier bow on the package. One of the things that really attracted me to green beauty in the first place was the idea of transparency. Being transparent about ingredients by providing full ingredient lists, stating where the ingredients came from, organic or not, etc.

“You’re paying for the experience,” we agreed. And would I have been lured into buying the razor off of Amazon or by this millennially pink site with fun, cute names for razors? ¯\_(ツ)_/¯ So then, let’s talk about the experience.

I love my Merkur razor. At first I was terrified I would accidentally cut myself while using the razor or while cleaning the tiny, thin, but extremely sharp blade. But after using the razor for nearly a year and a half now, I have experienced smoother shaves and way, way less nicks and cuts.

It’s a bit harder to shave my pits than my legs due to the nooks and crannies, but as long as I hold the razor at the right angle and don’t apply additional pressure beyond the natural weight of the razor, it’s not a problem. At the time that I first began writing this post last year, I wrote that I know I never want to go back to conventional, multi-blade razors. We’ll touch on this later in the post.

The Neroli shaving oil that came in my shave set, on the other hand, I can do without. First, I wish there was an option to select an oil, because I would have picked the Palo Santo oil instead (now there is an option to select). Second, at first I loved the thickness of the oil. I felt that helped form a protective barrier between the razor and my skin against cuts as well as moisturized my skin.

But the thickness of the oil also meant my razor would gunk up with so much hair that I would have to rinse it after every three or so passes over my legs or pits. It. Was. Nasty. Also, not a fan of the cheap-ish plastic bottle (though it does mean it won’t break when you drop it in the bath) and the ingredients are kind of basic (almond oil, castor oil, rosehip oil, essential oils). 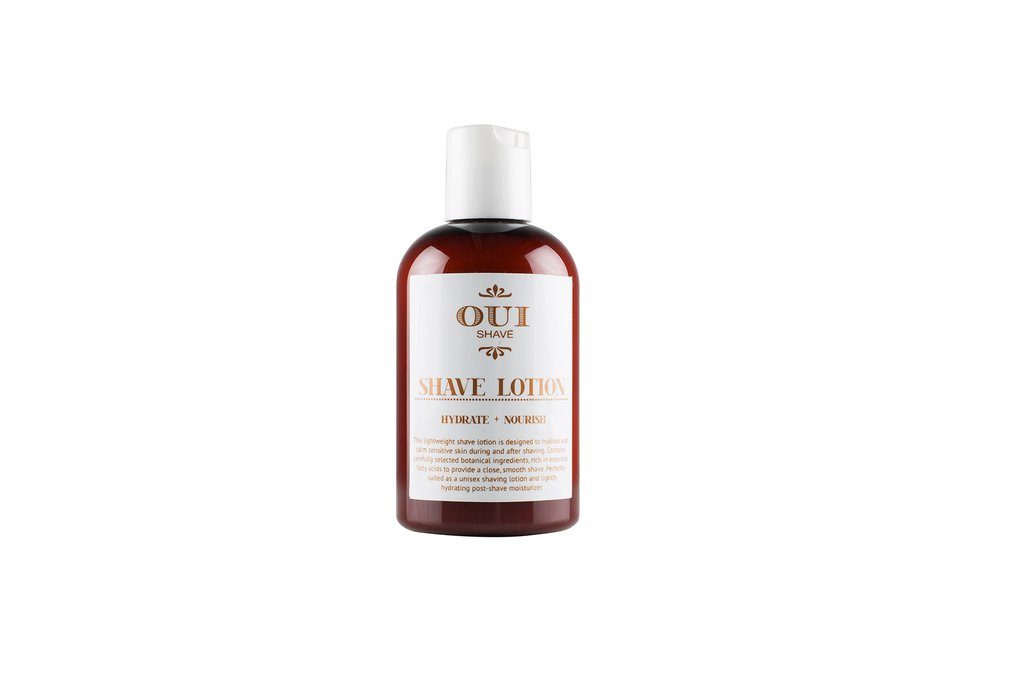 The Shave Lotion, on the other hand, I quite enjoyed. I loved the scent, and it helped protect and moisturize my skin without gunking up my razor. Instead of taking apart my razor and rinsing the blades multiple times in one shower setting while using the shave oil, I only had to do that once with the shave lotion.

Again, however, I was not a fan of the cheap-ish plastic bottle and it’s really not the best at all for squeezing out product. I had to usually shake the bottle and really squeeze it out to get product out, even at the point of having used less than half the bottle.

As for other products I’ve tried, I’ve ordered razor refills from Oui Shave as well as their Bikini Body Ingrown Relief Serum. The razor refills are also overpriced compared to other vendors. The ingrown hair serum I was excited about at first, but now I don’t have much motivation to use. The product, a clear, gel-ish and kind of goopy serum, contains alpha-hydroxy acids and thus the recommendation is to use overnight.

However, in comparison to skincare products that contain alpha-hydroxy acids, you usually apply these at night and rinse off in the morning. I typically shower at night. When am I going to have a chance to rinse the serum off unless I change my shower routine? (#firstworldproblems, I know.) In addition, I experienced some stinging upon using the serum after shaving which also put me off from using the product.

So is the experience worth it? Well, I sure wish I switched to a safety razor earlier, but in the future, I am going to Amazon or other sites for razor refills. I purchased the razor directly from Amazon for my sister.

I reached out to the brand to express my concerns about the lack of transparency, and the answer was that before Oui Shave, women, very much like me, were ignorantly going about using their Gillette Venus razors. Now, with the help of Vogue and bloggers and other news sources picking up the coverage of Oui Shave, Oui Shave has brought the idea to women en masse that safety razors are sexy, safety razors are beautiful, and there is this luxurious shaving experience to be had.

In the early days of the brand, there had been a page explaining the source of the razors, their history, etc., but apparently it didn’t sell. It didn’t really connect with customers. So Oui Shave scrapped it. And now we have a quick sourcing mention, lots of pink and gold, and Sex and the City, which, let’s not lie because I am proof of it, does sell.

A couple of responses I have (I’ve also already expressed this directly to the brand). I get that Oui Shave is a business and needs to sell. However, if you’re going to be in the green beauty sphere, please be transparent. It’s unfortunate the history page didn’t sell, but that is exactly what a consumer like me really wants to see. I really hope there are other people in green beauty who value transparency and would love to see this kind of page.

Also, besides the Wicked_edge subreddit, there is also an entire subreddit dedicated to women’s shaving. How many mentions of Oui Shave? One (at this time). And I quote, “… the 14k plating, which really isnt even that fancy”. I’m not sure if you can really say that women weren’t already into shaving and using safety razors. Yes, Gillette and all of its counterparts are what dominate the drugstore, but it’s not like women have never heard about safety razors before Oui Shave.

And finally touching back on “I’m never going back to normal razors”. I recently traveled overseas with no check-in baggage, and decided to rely on the hotel to give me my disposable razor in fear of confiscation. Ok, I nicked myself like three times the first time I used it, but wow. I got a pretty clean shave–probably cleaner that I had been for a while. Could this be chocked up to not changing my razor often enough? Perhaps. But perhaps with all this bad feeling over being deceived has made me not so against using some normal, cheaper razor again in the future.

tl;dr Not so enthused that I was fell prey to the branding/marketing of millennial pink + Sex and the City when I could have saved money buying my razor off of Amazon. I’m glad I got into safety razors, but am open to disposable razors if need be.

Disclaimer: I purchased all products mentioned in this post on my own. All thoughts and opinions are my own. I am receiving no compensation for my words.

For a Gorgias, Gorgeous Body

A Trip to Moon Juice, Café Gratitude, and The Detox Market